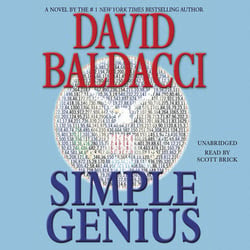 David Baldacci– a name synonymous with mystery, intrigue and suspense. His distinct flair for weaving a bit of truth into his fictional creations has allowed him to present believable stories that are highly entertaining. Add the talented actor/author Ron McLarty narrating, and Simple Genius could easily have been a heart-stopping, over the fence hit… but it falls shy of the homerun marker.

After her latest outburst of self-destructive behavior and threatened with jail time, investigator Michelle agrees to enter a private clinic. While in treatment, her partner, Sean contacts his ex-lover for an assignment. With funds drying up, he did not have the luxury of holding grudges. After an outburst of self-destructive behavior, Michelle lands in jail, where Sean sternly advises her the only way to avoid serious time is to enter a private clinic, an offer she begrudgingly accepts. While she cools her heels in the hospital, Sean is forced, due to a lack of funds, to take an assignment from his ex.

Suicide or Murder? Officially Monk Turing’s death was ruled a suicide, but Sean was interested in the unofficial version. Monk’s body was found just inside the perimeter of the CIA’s top secret training facility, Camp Peary–known as the “secret place” by the locals.
Monk’s autistic daughter, Viggie, was frightened and had great difficulty expressing her feelings. When anyone got too close she would withdraw into her own world. At times Viggie would play a specific selection on the piano, shout “codes and blood,” then disappear up to her room. When Michelle arrives, Viggie takes to her instantly. Numbers and codes, secrets and stories–Monk had programmed his daughter–and now the only way they could protect her was if she trusted them enough to tell them what she knew. And that was a very big if. And Michelle’s mental stability is still quite questionable.
In a nutshell:

Lives depend on the codes hidden within the mind of a grieving child, that refuses to talk to anyone except Michelle and she’s fresh out of the psych unit. The character interaction is robotic and when you combine that with onion thin plot layers, the result is a flat, foul smelling reading experience that is undoubtedly saved by the unparalleled narration of Ron McLarty. Although everything gets tied up at the end, it feels as if the author was restricted or limited in some way all the way through. There are so many stories within this story and each could have been a really good book, individually, but thrown together it reminds me of a child’s finger painting…we want so badly to get it, to really like it — but honestly it is simply a mess. Pick this one up at the library or borrow it from a friend, the audio is worth listening to if for no other reason than the excellent narration and the extra information about Bletchley Park and the infamous Beale Cipher.


Extras:
While Babbage Town is a fictitious setting, it was inspired by Bletchley Park, just outside London. Within this facility, many German codes were broken by the Allies, during WW II. Also, there’s a wealth of information regarding the Beale Cipher on the bonus CD.Including the three page cipher, the parts that have been decoded, maps and much more.

Other Books by David Baldacci