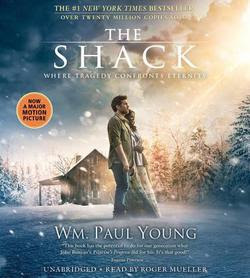 The Shack is a work of Fiction. The Shack tells the story of a miraculous, life-changing weekend spent with the Holy Trinity in a cabin. Mackenzie Allen Phllips (Mack) has been in a state of "great sadness" for the last four years. His life was forever changed when Missy, his youngest daughter was kidnapped during a family camping trip. Although her body was never recovered, sufficient evidence was found inside an old, run-down cabin to convince authorities she had been murdered. Mack receives a note asking him to meet at that very cabin for the weekend. The note is signed simply, Papa. Papa is what Mack's wife calls God.

What transpires over the next several hours is wholly engrossing and thoroughly entertaining. I  enjoyed the "unusual" characteristics given to the members of the Holy Trinity. Young doesn't follow the customary descriptions many people expect to see when discussing "God," "Jesus," and the "Holy Spirit." Most of us have been taught that God (the Trinity) takes on the form and/or voice that we need and will listen to at a particular point in our lives. Which explains why at the end God changes from a sweet African American woman to a gray-haired man. Because at the end, Mack needed that father figure.

When he arrived at the cabin, Mack was a man lost in a sea of anger, hate, confusion, and depression. As he interacts with The Trinity you can almost see this baggage melting and falling away. He is transformed by this weekend in the woods with "God." Roger Mueller's narration is spot on! Through expert use of tones and pacing Mueller brings the Trinity characters to life. Making each individually recognizable while complimenting the other members of the Trinity. A five-star audio performance! Even if you've read the hard copy, you should listen to the audio. It's an incredible listening experience.

I listened to this book with no preconceived ideas about it. I loved Young's physical descriptions of the Holy Trinity characters. It's refreshing. But most of all, it is entertaining! That's what fiction is supposed to do -- entertain. There are several areas where the writing falls short of flawless. But it doesn't distract from the story. Young put his heart and soul into Mackenzie Phillips and Roger Mueller gives him an unforgettable voice.

RJ
*I received a courtesy copy for review from Hachette Audio. 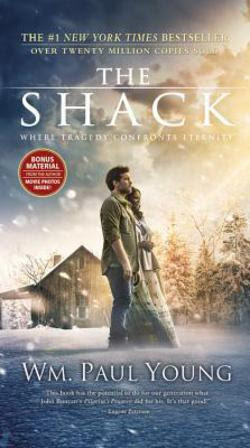