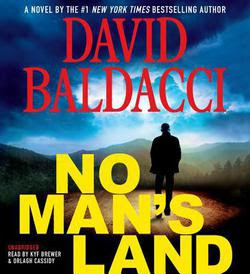 No Man's Land is like one of those rare, special, talented horses that win the coveted Triple Crown.
Conspiracy theories, the ethical questions swirling around implants for soldiers, accusations of murder, dementia, and heart-breaking loss are spun and woven together like the intricate silky strands of a spider's web. Beautiful, but deadly. Delicate, yet strong. It's a pandora's box of secrets and lies that now opened has no option other than to finally play out the last scene of a thirty-year play.

John Puller Jr was only eight years old when his beloved mother, Jackie disappeared. Despite an extensive investigation she has never been found. That was thirty years ago. Today, his father, a retired, decorated three-star general lies in a VA hospital losing the battle for his own memory. Dementia is an unstoppable enemy robbing John of his father at the cruelest possible time.

Arriving for a visit with his father, he is met by CID Investigator Hull and Colonel Shor. His mother's case has been reopened, that was the first surprise and his father is their prime suspect.
For three decades John Sr. was believed to be out of the country when his wife disappeared.
Information to the contrary has cracked his father's once air-tight alibi. In addition, a friend of his mother's, in what appears to be a death bed confession sent a letter to CID saying her husband was in Vietnam with John Sr and that he murdered Jackie.

Puller is warned to steer clear of his mother's case or face a court martial. But there's no way he will stand down. He is absolutely determined to solve his mother's case and clear his father's good name before it's too late. Puller fully intended to go at this case alone. It's too personal. Way too personal. But his friend, sometime colleague Veronica Knox is a dogged investigator in her own right and although he's never quite sure of her true motivation, he agrees two heads could be better than one.
But is it, really?

Enter the antagonist, convicted of murder, housed inside a maximum security prison, everywhere he went his reputation preceded him. No one wanted any part of Paul Rogers...not even the most hardened criminals dared cross him. He had ten long years with nothing but time, to plan his revenge. He had so many parts missing they had to pay for what they did to him. He was a monster, hell bent on revenge and probably hell bound for it. Whatever the consequences he would exact his own justice upon those he held responsible for what he had become.

Family secrets, old loyalties, and lies that reach from the battlefield, through the family home, to highest ranks of the military and super secrets government programs. Baldacci spun an impressively large web with the cold case and the monster. The two men are on a path that leads to an unavoidable, inescapable collision. And you have a front row seat!

The narration is incredible. Kyf Brewer and Orlagh Cassidy breathe life into Baldacci's characters. The narrators used charisma, inflections, accents and disturbing voice "mannerisms" to ratchet up the tension, filling the listener with dread and eager anticipation simultaneously. They reach through headphones to paint the beautiful, decommissioned Fort Monroe with such vivid, fluid strokes you would hang it on your wall. Brewer and Cassidy's transitions are smooth, effortless, and add depth to the dialogue. From the moment you press play until the last spoken words on the final CD, you are completely immersed in John Puller's world.

David Baldacci is one of the most prolific and popular writers today. No Man's Land is a good example of why. I was so into the story, literally hanging on every word, that when it was over, I looked through the box to make doubly sure I hadn't missed a disc. I was ready for the next chapter. But, I'll have to wait. That's one important aspect of a good book - leave the listener wanting more. Well, David Baldacci certainly did that. I can't wait for the next installment.

*Review copy provided by Hachette Audio. After listening to the unabridged version, I decided to write and share my opinion.


No Man's Land can be read as a stand alone. If you've never read a book in the Puller series, grab a copy- if you love it, you have three other books to keep you entertained until book five arrives on shelves. If you're a fan that devours the latest installment as soon as it is published, by all means - keep reading. Either way No Man's Land is a good read. 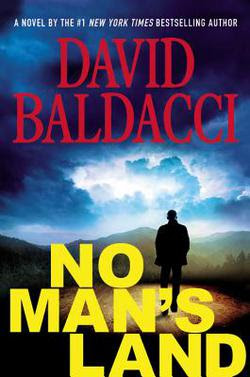