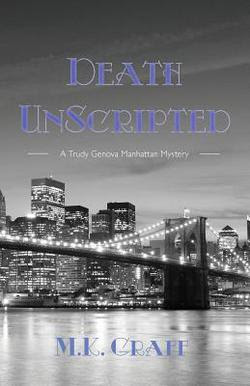 There's a lot to like about this book. A long list of characters that run the gammut of every conceivable personality populate Death Unscripted. Thornfield Place is a soap opera/TV series that is part Scrubs, part Guiding Light. Trudy Genova works as a medical consultant for the series. In short, it's Trudy's job to make sure what's done on camera is what would be done in the real world.

Trudy is well liked and manages to deal with all the melodrama and big egos...with one exception. Griff Kennedy. For Trudy he was sharp nails on a glistening chalkboard. So when he irritated her during lunch that day, she just had to dump that beautiful pie on his head. Yes, it was childish and I'm sure it felt wonderful, right up until the moment Griff mouthed "you," writhed and took his last breath. For real!

Now it doesn't look good for Trudy and she doesn't seem to realize that until the detectives paint the grim picture for her. An armchair detective, Trudy is determined to prove her innocence. But the harder she tries, the more guilty she looks. Sadly, the detectives don't believe her until yet another victim falls prey to the mysterious killer.

Death Unscripted is the first of MK Graff's books that I've had the pleasure of reading. It will Not be the last. The characters are developed and presented well, it is fast paced and I didn't know (for sure) whodunnit until the end. Not to mention it was entertaining from this first chapter right til the end.
If you like mysteries that have personality and are just down-right fun, Death Unscripted is for you!