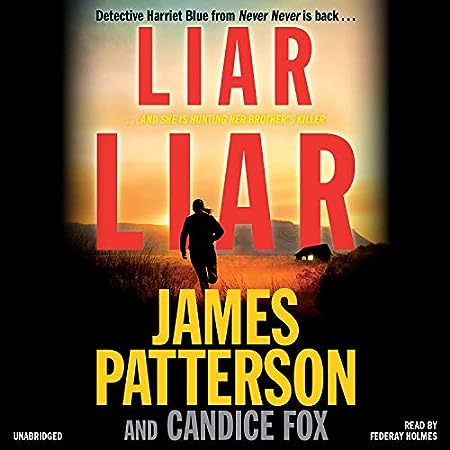 Harriet Blue was introduced to readers in a 176-page BookShots prequel entitled Black & Blue. Set in Australia this series has followed Harriet through the sex crimes unit, the outback searching for a serial killer, seen her brother jailed for a crime he did not commit and murdered while in custody. Now Harriet herself is on the run. She is determined to catch Banks and see that he gets what he deserves. She will avenge her brother and clear his name. The cat and mouse game between these two lead characters carry the listener to the brink of insanity. It is no wonder Harriet can no longer think rationally or sanely. All she can think about is making Banks pay. . .and pay he most certainly shall. The narrative rockets toward the ending. There was a good twist that caught me off guard and a few important questions left dangling in the breeze. Which lets me know there will be a book four (and a book five, but we will have to wait until next year for that).

Okay. Years ago I was a die-hard Patterson fan. Yes. Back before he was tossing out novels like fruit-cakes. He has turned his writing, more importantly, his name into a Brand. Now, I do not fault the man for using what he has to secure a wonderful life for himself, his family, and several generations after. But isn't there a way for us to have our cake and Patterson eat it too? I mean couldn't there be a sacred series (or two) with a strict, hands-off policy. No flunkies allowed to contribute. That would be great. I would happily wait a year, maybe longer to have Patterson penning stories solo, in the genre he once dominated. It saddens me that people make fun of him now. They use him as a literary pin cushion -- someone to poke fun at. Yeah, I know. He brought it on himself. But I ask that we be careful in our skewering. Are we faulting Patterson for poor quality writing or for having a system that allows him to sell millions of copies of it?

Quick history:
Set in Australia, this series actually began with a pre-quel titled "Black & Blue," (Dec. 2016) Only 176 pages long the Book Shots introduction to Harriet Blue was quickly followed by Never Never, a month later (Jan.2017). Fifty Fifty hit shelves in February 2018 and now Liar Liar was published January 2019. There were rumors this series would only run four books. But Harry fans rejoice, there are plans to release a fifth novel, Hush Hush in the fall of 2020.